The Shriners Hospital Outreach Clinic in Lviv, Ukraine took place from December 7th through December 12th 2015 at the Lviv Regional Pediatric Clinical Hospital ” OKHMATDYT  .” The outreach clinic was conducted as a joint effort with the Ministry of Health and the Lviv Region Department of Health.

A joint American – Ukrainian team of medical professionals worked together over the course of 5 days to evaluate 147 child burn victims  and perform 39 surgeries. The American team, led by Dr. Gennadiy Fuzaylov, included participants from Boston, St. Louis, and Michigan. Among them were 6 doctors and 2 nurses. The Ukrainian team was comprised of staff members from 3 Lviv-area hospitals. 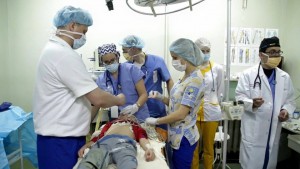