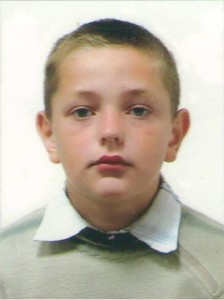 The child continued to fight for his life in Hospital Number 8 with Vasyl Savchyn as his doctor. Knowing the child had only days at most to live with the technology and resources available to him locally, Dr. Savchyn contacted his colleagues in Boston to initiate a heroic attempt to save the child’s life. Doctors Gennadiy Fuzaylov and Daniel Driscoll planned and facilitated the extremely complex transport of the twelve-year old, Andrij Tsarynskyj of Lviv, from Ukraine to the United States. The Governor of the Oblast of Lviv, Mykhailo Kostiuk, and the Mayor of the City of Lviv, Andriy Sadovyy, immediately initiated a successful campaign to raise funds to transport the twelve- year old to Boston Shriners Hospital. Amazingly, the citizens of Lviv raised more than $250,000 within less than a two-day period. i

“The transport of Andrij was very complicated by the limitations of time, the difficulty of medical transportation of a critically ill patient over such a distance, and by the severe cold weather conditions in Europe and Ukraine,” said Dr. Gennadiy Fuzaylov. “The transport process of this patient was coordinated by a support group within the Lviv government, who worked 24 hours a day. The Governor and Mayor provided efficient and creative ground transportation from the hospital to the medical aircraft team, MedFlight911. In addition a U.S. medical team provided constant support throughout Andrij’s journey.” As soon as Dr. Fuzaylov was first contacted by the Lviv doctor, Boston Shriners agreed to accept all three Tsarynskyj children for free treatment.

Shriners supportive staff worked around the clock to facilitate an entering visa for Andrij and his uncle, who because of the loss of his parents became Andrij’s new legal guardian. The tragedy of Andrij and his family inspired many people to come together.

Andrij struggled courageously to survive. After a month in intensive care and numerous operations including treatment of burn sepsis, bleeding ulcers and severe pneumonia, he passed away due to pulmonary complications found too frequently in inhalation injuries. His chances of survival were poor from the beginning but the valiant efforts of the people of Ukraine, the medical teams in flight and at Boston Shriners Hospital kept him alive for four weeks.

The experience, while failing to save Andrij, has helped streamline a process of the transfer of critically injured children to Boston. It has also helped the people of Ukraine know that Americans are willing to help, and that the Ukrainian doctors know they have supportive colleagues a phone call away. Andrij’s brave journey will save future unfortunate burn victims of his country.